"Six-Year-Old Boy with a Podcast" was the subject line in my inbox that immediately caught my eye one morning last November. I was quickly captivated by Milo's mission to inspire dreamers young and old, and the incredible progress he's made doing just that!

When we first met, Milo was raising money for the second season of his podcast This American Kid. Milo's podcast is for "kids and kids at heart" and focuses on inspiring others to follow their dreams. In each episode, Milo interviews a role model who is actively living out their childhood dreams.

These past few months, Milo has become not only a Bitsboxer, but also a dear friend of ours. His photo is featured on our homepage, and you can even watch him unbox his first Bitsbox here. Apart from being adorable, Milo is kind, brave, and incredibly smart. We thought you'd like to learn a little bit more about this six-year-old boy with a podcast: 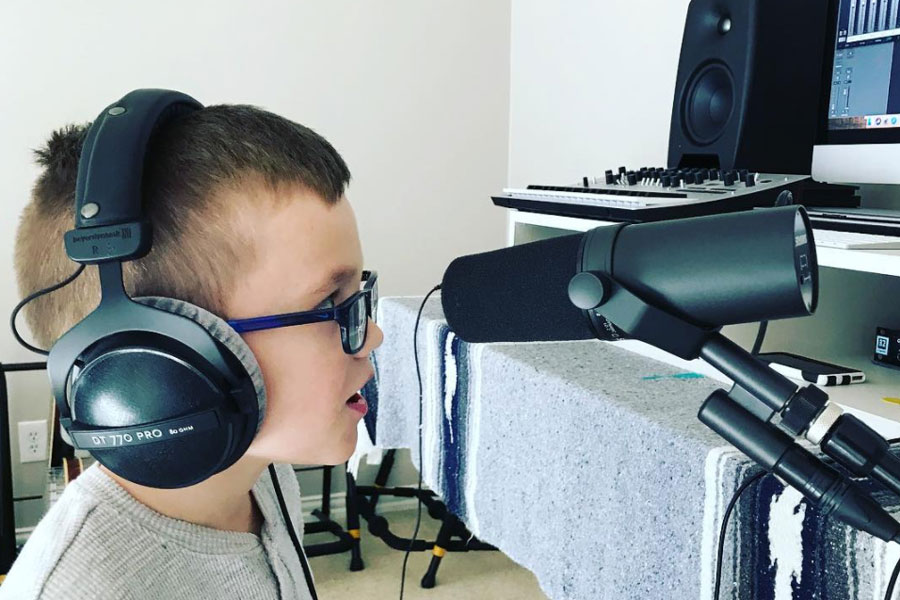 Milo recording This American Kid on his new microphone

Emma: What made you want to start a podcast?

Milo: Well, I listened to a few podcasts and I thought it would be fun to do my own.

What steps did you have to take to create This American Kid?

Before every interview, we worked together to make a list of questions that I'll ask.

How did you come up with the name This American Kid?

My dad really likes the podcast This American Life. We got the idea from that!

Do you have a favorite podcast to listen to (besides your own)?

I like lots of podcasts. Two science podcasts I like are NPR's Wow in the World and Brains On.

And there's one fantasy podcast called The Radio Adventures of Dr. Floyd. It's about these two scientists, Dr. Floyd and Dr. Steve. Dr. Floyd travels to different times trying to stop Mastermind Steve and his magic sock from stealing very famous items and selling them on eBay.

Can you tell me about becoming a finalist for Imagine If, with Jif?

Well, my aunt found the contest online, and told my mom and dad that I should enter.

When Jif told me that I was a finalist, I said it was one of the biggest accomplishments of my life.

Yes, and they announced the winner on January 23rd. The winner was Stitches by Charlotte.

What's one of your favorite interviews you've done for your podcast?

One of my favorites is Nancy Churnin. She works for the Dallas Morning News, and she also writes children's books about people in the late 1800s or early 1900s who overcame challenges.

(Pssst! If you didn't know, William Hoy was a center fielder for the Cincinnati Reds, and is known for being the most successful deaf player in the Major League.)

If you could pick anyone in the world to interview, dead or alive, who would it be?

I would definitely pick Jackie Robinson. He was the first African American to play in Major League Baseball.

So I get a sense that you like baseball?

Yeah, baseball is one of my favorite sports.

Do you have other sports or hobbies that you like to do outside of podcasting?

I really like LEGO. That's one of my favorites.

What about your favorite subject in school?

We sent you a Bitsbox after we first met. What did you think of it?

I thought it was really cool. I really like the mini app cards. They all look really funny and cool.

I think the funniest app I built with those cards was Dump Truck. Once, instead of using 'rock10', I looked up rocks and it said there was a rockstar and I decided to put up 'rockstar'!

So instead of dumping rocks, you dumped rockstars?

Yep! Another one of my favorite apps in the first pack is It's Raining Cats and Dogs, but I changed it to It's Raining Pandas and Red Pandas.

I also got a joke for you: What's worse than raining cats and dogs?

Ha! That's a great joke. Do you know what you want to be when you grow up?

I change my mind a lot. But right now, I want to be a diplomat. I like to learn about different countries and I thought it would be cool to travel to different ones.

What would you tell other kids your age that have big dreams but are maybe afraid to pursue them?

Face your fears! Don't let ‘em get into your head.

Scott and Aidan faced many fears quitting their corporate jobs and founding Bitsbox. Our company's dream has always been to teach every kid in the world to code, and we're so grateful Milo was one of the coders we met along the way. Thanks, Milo, for inspiring us and encouraging other kids to chase their dreams too!

Milo successfully reached his campaign goal in order to make a bigger and better Season 2 of This American Kid. We'll be listening, and recommend you and your kids do too!