Meet Grace: Artist, aspiring engineer, and the highlight of our Shark Tank debut

And while she is an actress in California, that's not how we discovered her. Grace was actually one of Bitsbox's very first subscribers, and we received several emails from her early on in our business declaring how much she loved making apps. She then made this unboxing video with her little sister (I'd highly recommend watching her impression of her mom at 3:23). The rest is history on the Bitsbox/Grace friendship!

If you thought she was impressive on Shark Tank, wait until you hear what she's up to now. 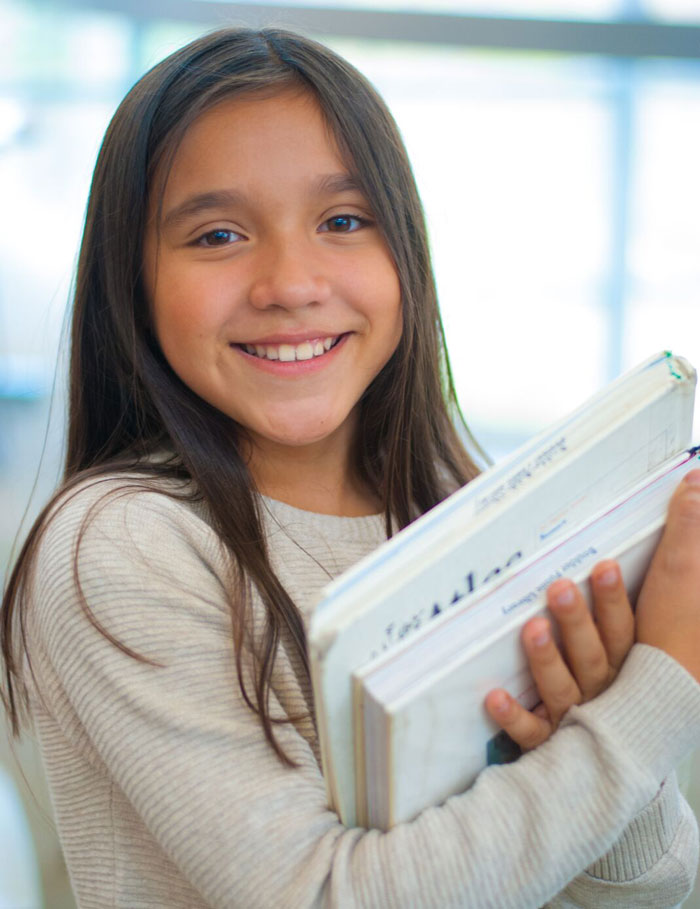 Grace at the Boulder Public Library when she visited Colorado.

Emma: You were one of our very first Bitsbox subscribers! How did you/your mom discover us?

Grace: I was bored because it was summer, and there was nothing to do. I kept looking for [programming] things. I had started with Scratch, but that was really boring to me. So we were still figuring out ways to code.

I ended up taking a semester of Python. And I was thinking Oh there must be a few companies that have an online… something right? I looked it up and then Bitsbox popped up in the middle of my Google search.

I really liked it! I found out [you were] just a startup, so I got super excited. I got my mom to sign me up, and then I really loved it.

Just trying the first 4, Hello World and the other beginning ones, I really really liked it. I had no idea JavaScript was a thing—I didn't know it existed!

What did you do your semester of Python through?

I went to a facility in Santa Clarita where they specialized in it. I took the beginner, intermediate, and advanced semesters.

Do you have a preference between JavaScript and Python?

Hmm I like JavaScript a little better. But not because it's easier. It's because it goes off on the littlest things. Like if you forget a comma or something, it'll be like oh, ohh and then you have to go through the whole thing and find it!

It also helps you find things that you're like oh, I didn't like this, I'll change it. And so it's a lot easier to change too, because in Python it's very extensive and repetitive. You'll have to type three paragraphs just to get [anything] on the screen!

You've gotten twenty Bitsboxes so far. Do you have a favorite box or favorite app?

Hmm favorite app… I have such a hard time! I would have to tie it between Pac Crabs and Tuba or Not Tuba. The originals are always the best!

What's one of your favorite things about Bitsbox?

I have too many! It's a lot more flexible. All you need is a computer! A computer anywhere and you just log into your account! It's so easy just to move around.

Also because if you missed a semester [of another coding course], you'd have to retake the whole beginner semester. I like that Bitsbox keeps advancing you little by little, and adds on things rather than slams them all into you at once.

So you know JavaScript and Python. Are there any other languages you can code with?

What are some of your other hobbies?

Playing piano. I had a piano class today. It's not fun when you don't practice. The teacher gets on my case!

And drawing is my life. And reading. Just drawing and reading. On a rainy day, I could just stay inside with a warm pack all day just reading one book.

Yeah like if you warm up one of those hot pack thingies. Here's my lazy side showing through!

That's really hard. I like The Bronze Bow by Elizabeth George Speare probably. The word choice is just very elaborate and articulate. And the visuals are absolutely wonderful.

Yes! Well, I use to draw a lot of anime. But now I draw more just Americanized cartoons. And I'm getting into Renaissance. Like drawing the Renaissance bodies and things like that. 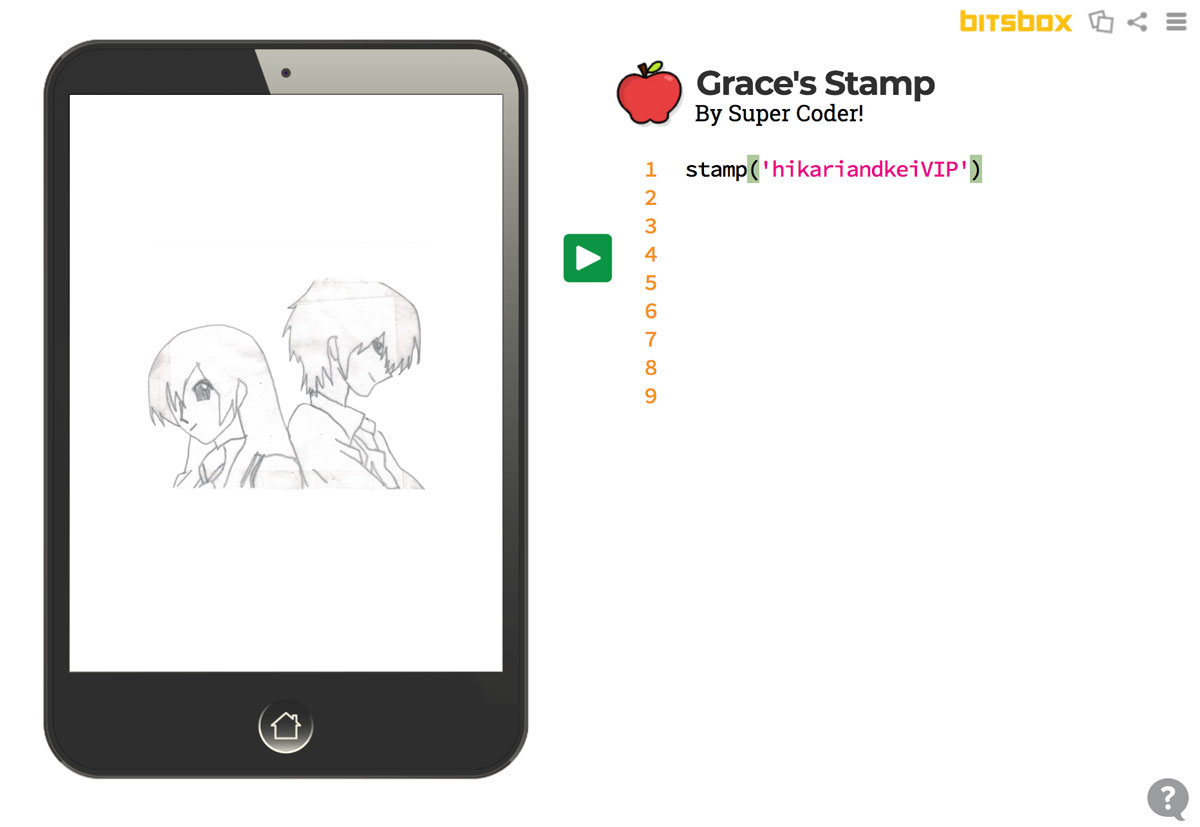 A stamp Grace drew for our Library.

What's your favorite subject in school?

Ooo, I feel like art isn't the best choice because art is anything right? You could just put a penny on a canvas and smack paint on it and say "This is beautiful art" and put it in an art museum. Anything is art.

On top of everything, you're also a bilingual actress. How do you balance all your interests?

It's actually pretty hard, because you think acting is like: you pay for an agent and pay for a manager and BOOM you're an actor and you get jobs. But it's actually really hard because there's thousands upon thousands of actors. [Your agent] will send emails to you, and one hundred people will show up. And you gotta fight out of those one hundred. It's not just one round. You have to go through three rounds for them to choose you. They thin it out. Only the best actors survive!

I think acting is a lot of hype. But also fun. So even though it's hard to do acting and have time to do other things, I just take some of my little travel things. I'm telling you, some of those little travel things have saved my life over the years. Little travel drawing packs, little travel color packs. Sometimes I'll bring my theory book for piano and do it while i'm traveling. So you just gotta find little loopholes!

So the time you have on a plane or in a car is when you indulge your other interests?

Do you know what you want to be when you grow up?

Yes. I want to be a biomechatronist.

Yeah, most people are like: Wait, repeat that again? Don't you wanna be a dentist, or a surgeon or something?

In 2016, Scott and Aidan asked you to join them on Shark Tank. What was the first thought that ran through your head?

I was elated. I remember I got in contact with you guys by emailing Anastasia. But I never thought I'd have a real opportunity to meet you all. I thought Ohhh, they're just being nice, they just think I'm some random dweeb kid. And my mom even told me "Stop messaging them! They don't want to talk to you! You're just another kid who is trying out their product."

Actually, I don't really like thinking of Bitsbox as a product. It's more of a life changing thing, you know what I mean? It'll change your whole perspective on little things. But anyway…

You're so sweet. So were you nervous to be on Shark Tank at all?

No, not really. It's like my second home as an actor. Everything is cut and pasted ya know?

It was funny because I was watching the episode [of Shark Tank] and some of the other people were presenting their product. And even if they looked normal, like with a straight face, the camera would zoom in really fast, like du du duuu and put the dark music and make it look like they were scared.

It's a lot of hype, but it's like my second home.

Do you have a favorite Shark?

Ooo that's hard. I've probably always liked Robert the best. He's always the more polite one, he doesn't curse people out. Also because he's the son of an immigrant. So that kind of tells the story of a lot of people that had to work hard to get where they are. They don't have it handed to them. They have to fight for it and deal with disappointment and hardship.

Do you have an idea for something you'd like to pitch to the sharks one day?

Told ya you'd be impressed. Grace is one of the brightest eleven year olds I've ever met, and I wish the interview was taped so you could hear the lovable and fun cadence in her voice.